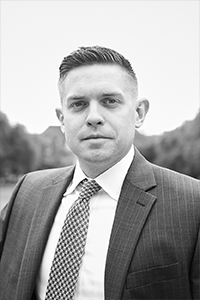 Evan Bruno is a graduate of the Indiana University Maurer School of Law, where he was named first place individual champion of the Sherman Minton Moot Court Competition.

Evan began his legal career as an attorney in the research office of the Illinois Fourth District Appellate Court in Springfield. From there, he went on to clerk for Illinois Appellate Court Justice Robert J. Steigmann in Urbana. Evan joined Bruno Law Offices in 2015.

He has served as an adjunct law professor at the University of Illinois College of Law, where he focused on negotiations, and as a columnist for the Chicago Daily Law Bulletin, the premier legal publication relied on by lawyers and judges in Illinois.

In 2016, Evan was named President of the Champaign County Criminal Defense Lawyers Association.